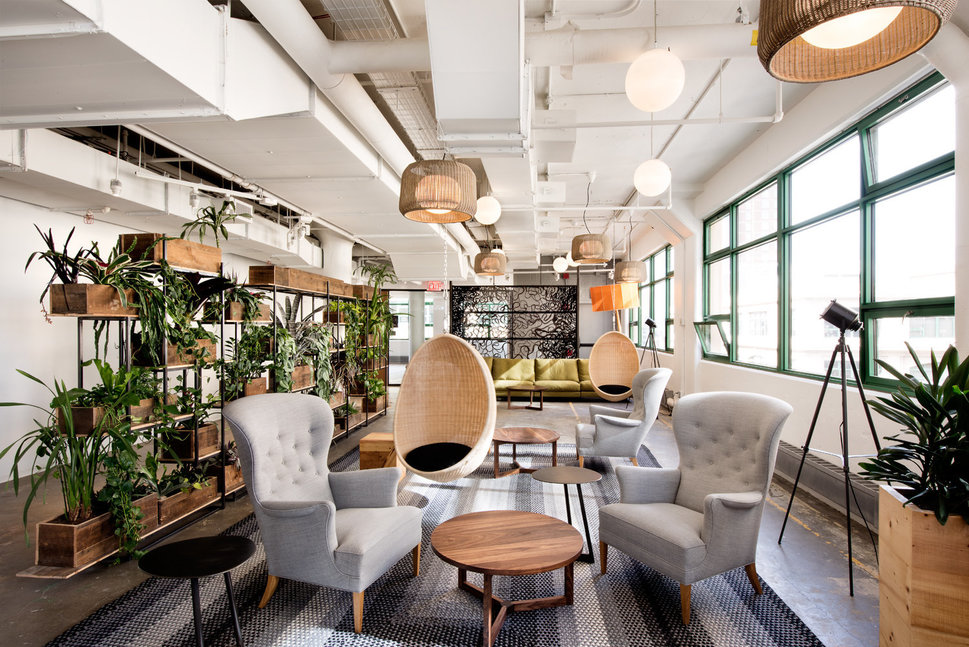 In the ninth-floor library at Etsy’s new headquarters in Brooklyn, New York, the wooden coffee tables were built from sustainably sourced timber. Rectangular pots, made of reclaimed wood, hold plants that will feed off rainwater collected from the roof. LED lights hang over a striped gray rug that contains only natural materials. The paint on the walls, too, was vetted to ensure that it contains a low number of volatile organic compounds, which are released into the air and can cause breathing problems.

Green-certified buildings are hardly a new phenomenon. The proliferation of the Leadership in Energy and Environmental Design (LEED) designation over the last decade has meant that energy-conserving lights, solar panels and efficient thermal systems are common features in many office and residential projects. The materials used in the construction and furnishing of a building, however, are not always subject to the same rigorous environmental standards.

The Living Building Challenge is trying to change that.

A certification created by the International Living Future Institute in Seattle, the challenge pushes environmentally friendly design further by setting ambitious requirements for energy and water usage as well as for all materials entering a space. A building must operate fully on renewable energy, generated on-site, and supply its own water by collecting and treating rainwater. No object in the building can contain toxic “red list” materials or chemicals. Materials have to be responsibly sourced and have minimal carbon footprints. Buildings must be sustainable to the core, from the furniture to the internet cables.

“This is about leapfrogging forward past incremental achievements and toward more holistic, high-performing buildings,” said Kathleen Smith, vice president of the Living Building Challenge. “What if buildings could make a place better than what it was before?”

Because the extent of a project may be limited by municipal water and energy regulations, an office like Etsy’s can still achieve partial certification by focusing on just some of the Living Building Challenge’s criteria. Currently, 44 projects have been certified by the institute, and over 300 others are in the design stages. 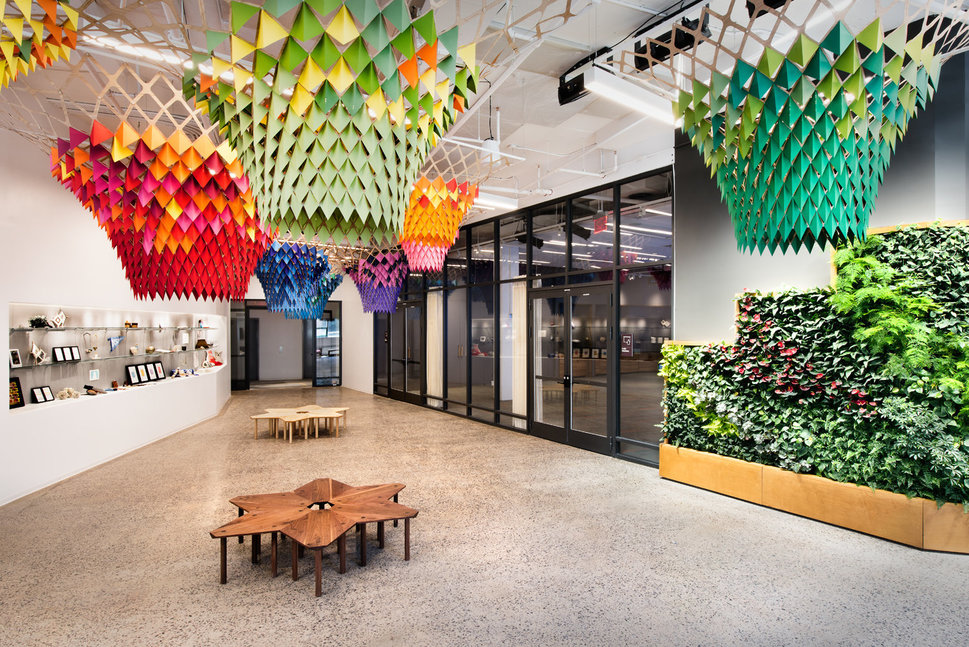 At Etsy’s office in Brooklyn’s hip Dumbo neighborhood, where employees just moved in last month, every smear of glue and finish on the tables were scrutinized to make sure they adhered to the materials standard of the Living Building Challenge. A small team vetted more than 1,500 items, even down to the screws for the bathroom stalls, for the $20 million building project as the e-commerce site eyes its potential role as a leader in sustainable office design.

Thoroughly eco-friendly computers, though, are not quite within reach yet. Etsy’s office is lined with rows of Apple laptops, which are among some of the items not covered within the scope of the challenge.

“You don’t get an opportunity to design and build new headquarters very often. We wanted to use that as a lever for change,” said Devon Leahy, who heads up Etsy’s sustainability and innovation initiatives. “The Living Building Challenge is a vessel for positive health and environmental change in the building industry, and that’s something we really wanted to be a part of.”

Like most environmental initiatives, the challenge comes with a hefty price tag. The institute estimates that high-end projects that pursue Living Building certification could cost up to 25 percent more than a regular building. But efficient energy usage could help significantly reduce a building’s operating costs over its lifetime.

“The future of green design has a luxury aspect to it,” said Peder Anker, an environmental studies professor at New York University. “Will it be for the rich? Initially it may be, but the hope is that this will trickle down and become standard practice for every building.”

The Living Building Challenge aligned easily with Etsy’s commitment to sustainability, a core part of the company’s mission since its founding in 2005. As Etsy looked to ramp up its business and fulfill its role as a certified B corp, through which the company is committed to meeting social and environmental goals, the challenge also provided a way to trigger change in its supply chain and how materials were sourced.

For the Etsy sellers and small manufacturers who produced about half of the furniture and artwork in the new office, adapting to the stringent standards was a learning process, since the Living Building Challenge is not yet a widely understood program. All the wood used, for example, had to be certified by the Forest Stewardship Council and salvaged or sourced from well-managed forests, forcing makers to pivot on the way they approached a table or cabinet.

Etsy took an active role in helping its partners adjust. Instead of seeking out individual furniture firms that were already FSC-certified, the company obtained group certification for its makers and even some of their timber suppliers. Certification is costly and can be a problem when building individual wood pieces, designers say, because the FSC sector is largely steered toward flooring or large-scale architectural work.

Etsy’s project is already sparking some change, as its construction partners and material suppliers become more knowledgeable about these standards. One timber company dropped its minimum order requirement after working with Etsy, said Craig Montoro, whose two-person design firm First Third built around 100 desks and workstations for Etsy.

“It’s a start at getting FSC suppliers aware that there are little guys that want to use FSC lumber as well,” Montoro added. 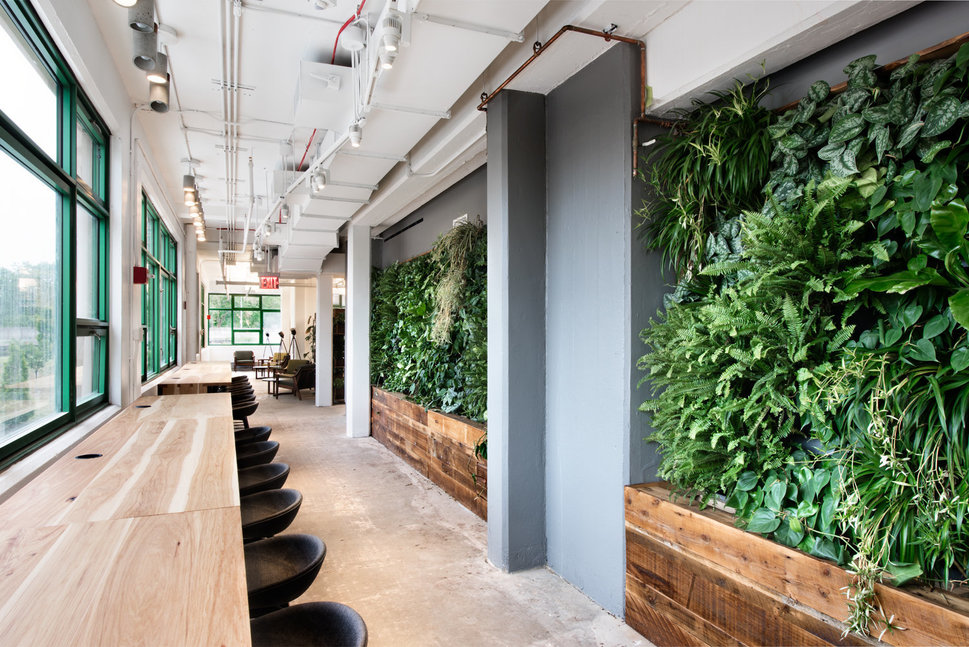 Even small questions to commercial manufacturers about the materials that go into a product have helped to improve transparency in the market. Just as consumers now expect the food at their grocery store to be properly labeled, items included in the Living Building Challenge will be linked to tags on the International Living Future Institute’s website, explaining the materials used to make each item. The institute fields a rapidly growing number of applications each day from manufacturers looking to change their materials to comply with new building demands.

Etsy expects to add dozens of these “declare” labels to the online database, for items ranging from glass wall dividers to cork insulation panels.

“The scope of this project is so significant that it can really make a mark in the construction industry,” said Justine Chibuk, Etsy’s capital projects manager.

A lack of convenient alternatives to the materials on the red list, though, can add further hurdles for companies looking to certify under the Living Building Challenge. Among the banned materials is vinyl, commonly used to cover wiring, and designers have to find creative ways to get around it.

“There is a kind of bias for natural materials,” said Michael Garrison, an architecture professor at the University of Texas, Austin who focuses on sustainable buildings. “Oftentimes it can eliminate certain materials that in fact could be healthy, extremely energy-efficient and don’t off-gas,” he added, using a term for the release of chemicals into the air.

As the physical footprint of Living Building-certified sites grows, so has the complexity of the projects. When planning for Etsy’s office began nearly three years ago, the largest interior that had been certified under the Living Building Challenge was 20,000 square feet. Etsy’s headquarters is 10 times that size, and the institute is working on proposals for a mixed-use space and a tech campus that are each 1 million square feet.

The growing visibility of the Living Building Challenge comes at a time when sustainability has become increasingly tied to the larger issue of social responsibility. As more companies turn toward clean energy and other sustainable practices, that mindset has also fueled innovation in physical spaces and design that can promote the wellbeing of inhabitants.

“Cities and organizations are worried about climate change and health, and are thinking about what to do to reverse trends,” said Karen Lee, a physical environment consultant who previously worked in New York City’s health department. “We see there are increasing certification products that are out there to help guide those practices.”

For many urban planners, green certification is only scratching the surface of a sustainable future. Designers say that smart buildings could be eventually as sensitive as human skin, responding to sunlight and adjusting for airflow and temperature. And, crucially, they could collect and funnel natural resources to inhabitants of other buildings.

“We’re talking about buildings that generate more energy than they use,” Garrison said. “When buildings have a net positive use of energy and water, we’re seeing the transition from buildings being consumers to being things that harvest and distribute energy and water. That would be a profound change.”

For Etsy, reviewing the various materials entering its new space proved to be among the toughest parts of the Living Building Challenge. Other features, including rainwater irrigation, rooftop solar panels and occupancy sensors that control how much lighting is needed, are things that have already been adopted by many LEED-certified buildings. Etsy has also added bike storage, showers and a breathing room, where employees can take meditation and yoga classes. 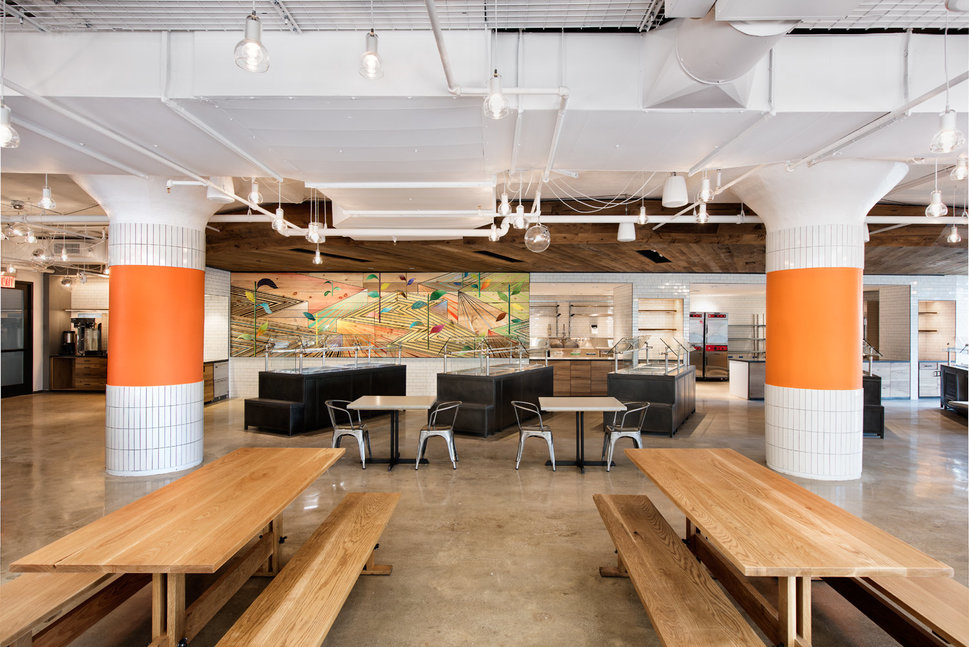 The company’s twice-a-week lunch program, too, is getting a boost. Local caterers working with Eatsy, the company’s cafeteria space, will have a bigger kitchen facility (in keeping with Etsy’s mission, all the food will be seasonal). Compostable plates will be replaced by real china sets, and the office already uses silverware and glass cups.

Memorabilia from the old office can be found in every corner. Old desks decorated with glitter and polka dots were taken apart and repurposed into a spiraling wall installation. Mr. Grit, an eight-foot tall owl-like sculpture that serves as Etsy’s unofficial mascot, now greets visitors in the reception area. 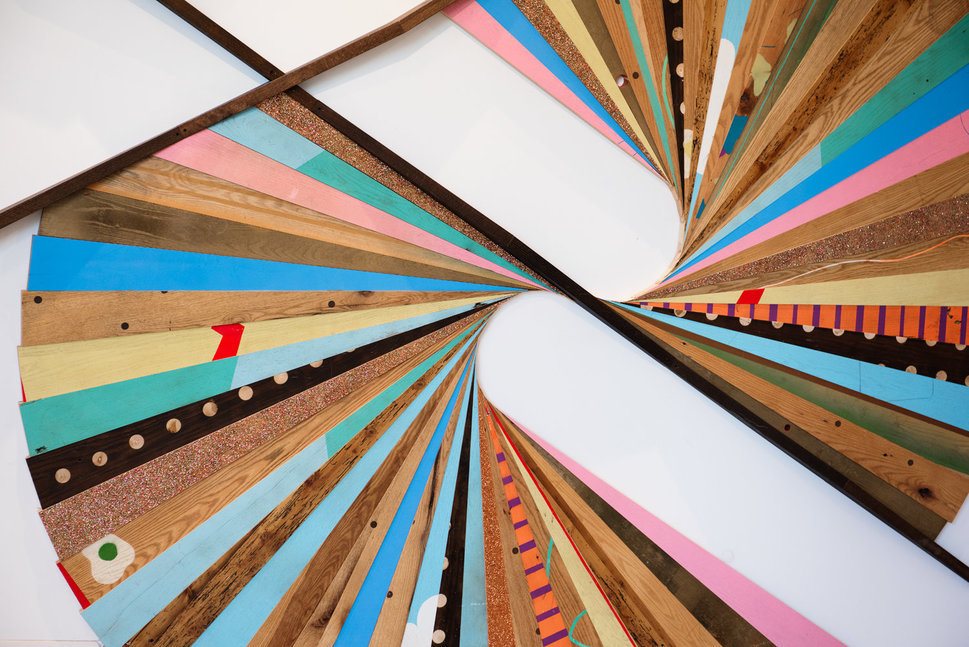 Employees have access to natural light and plants no matter where they’re sitting in the office. But it’s the craftsmanship embedded in the new space that adds a particular draw.

“You feel the weight and the grain of the wood, you see the imperfections, and it really is so unexpected that it makes you want to touch it,” Elise Pereira, who manages internal communications, said as she ran her fingers over a handmade reclaimed red oak table. “It sounds cheesy, but it makes you want to do good work because there is good work around here.” 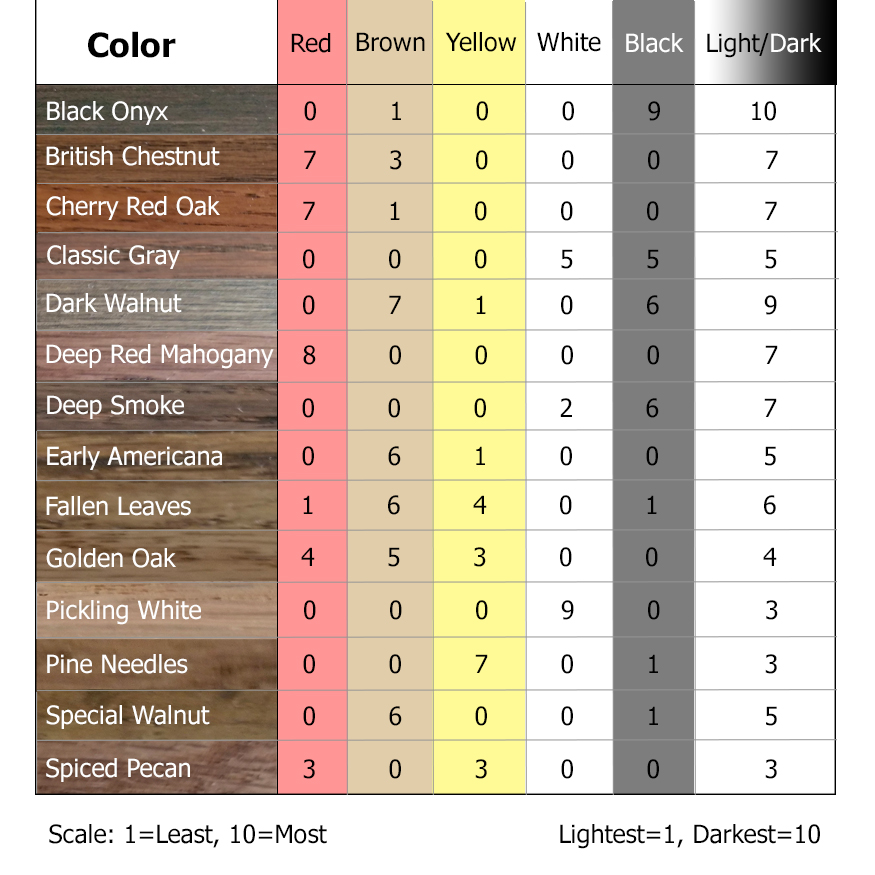